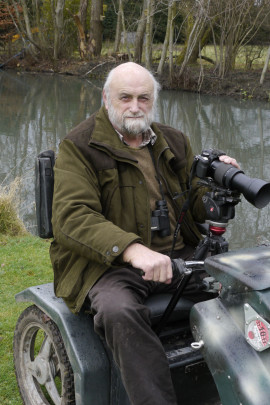 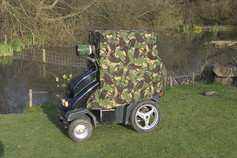 Wildlife has fascinated me since early childhood. My mother used to say I watched birds from my pram. I was fortunate to have been brought up on the side of the South Downs in West Sussex where I spent a great deal of time exploring the downs as a boy. School was followed by a Biology degree, and my first employment was with the British Trust for Ornithology in the 1960's organising census work. As a teenager I used to paint and draw birds, and the truth was that I was more interested in an artistic approach to wildlife than a scientific one. I am sure that is why I took up photographing birds.

I bought my first camera in the late 1970's. I started by concentrating on birds at the nest using medium format cameras. By 1984 I became aware of the potential of long telephoto lenses on 35mm SLR cameras. For me everything changed in 1985 when Minolta were first to inovate real autofocus cameras. I grabbed this advantage with both hands, and for the next 8-10 years worked with the Minolta 600mm f4 lens. Today things have advanced so far that I am now using lightweight micro four thirds equipment, the Panasonic GH3. Video has interested me too during the last 10 years. I have always worked mainly in the UK because British Wildlife is my first love. I like Scandanavia too, and have also worked in some southern European countries.

I was granted a fellowship in the Royal Photographic Society in 1992. I have submitted pictures to wildlife libraries for over 30 years, but my interest in wildlife photography is more a passion than a commercial enterprise